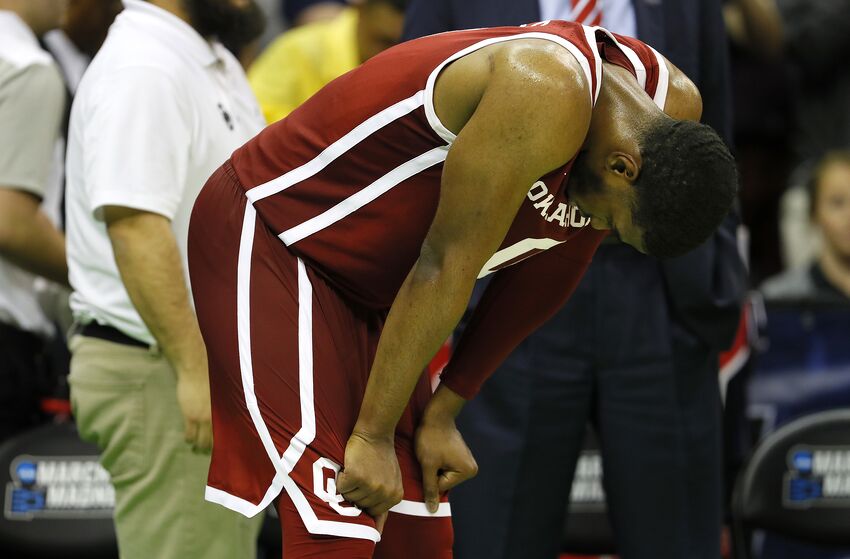 COLUMBIA, SOUTH CAROLINA - MARCH 24: Christian James #0 of the Oklahoma Sooners reacts after being defeated by the Virginia Cavaliers in the second round game of the 2019 NCAA Men's Basketball Tournament at Colonial Life Arena on March 24, 2019 in Columbia, South Carolina. (Photo by Kevin C. Cox/Getty Images)

Men’s Oklahoma basketball had beaten the mighty Kansas Jayhawks in Norman the in each of the last two seasons. Kansas made sure that did not extend to three seasons with a 66-52 win at Oklahoma on Tuesday night.

The Sooners (11-5, 2-2) needed three things to happen to beat Kansas: Shoot well, rebound well and get help (beyond the Big Three of Kristian Doolittle, Austin Reaves and Brady Manek from the supporting cast. They got one of the three, and that was the difference in the game.

Kansas (13-3, 3-1) was without the Big 12’s leading scorer, sophomore Devon Dotson, who was forced to miss the game because of a hip pointer suffered last Saturday against Baylor. Dotson averages 18.0 points a game. As it turned out, it didn’t matter.

University of Iowa transfer Isaiah Moss replaced Dotson in the Jayhawk starting lineup and made up for the offense missed from Dotson, scoring a game-high 20 points, including 6 of 11 three-point shots. Udoka Azubuike added 16 points for the Jayhawks.

Kansas dominated the paint area and the boards, holding OU to just one shot on most trips to the offensive end, and Oklahoma was stone cold most of the second half. That allowed the Jayhawks to gradually pull away over the final 10 minutes of the game, widening what was just a one-point KU advantage at halftime.

Kristian Doolittle led OU with 13 points and 10 rebounds, but shot just 5 of 18 from the floor.

The Kansas defense, with a big size advantage down low, forced Oklahoma to take outside shots. Almost half of the Sooners’ shot attempts (29 of 62) were from three-point range, and they made just eight of them.

Next up for the Sooners is a home game with TCU on Saturday.

Here are some more notable numbers from this game:

1 — The loss was the Sooners’ first loss at home in seven games this season.

13 — Points in the game by true freshman De’Vion Harmon, including three three-pointers.

30.6 — Oklahoma’s field-goal percentage in the game on 19 of 62 shooting. Austin Reaves, the Sooners’ second leading scorer on the season was just one-of-nine shooting for four points.

46-32 — Rebounding advantage by Kansas. Udoka Azubuike had 14 rebounds for the Jayhawks.