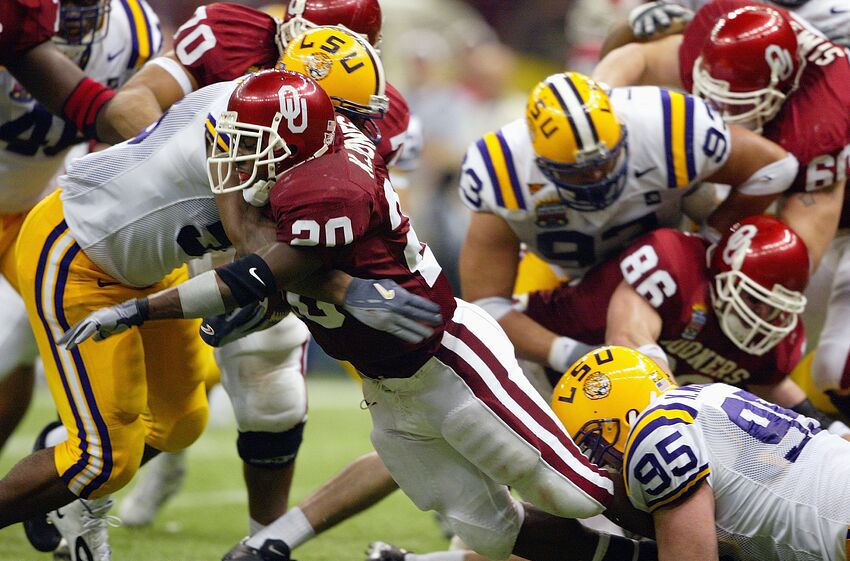 NEW ORLEANS - JANUARY 4: Running back Kejuan Jones #20 of the Oklahoma Sooners is tackled during the game against the Louisiana State Tigers in the Nokia Sugar Bowl National Championship on January 4, 2004 at the Louisiana Superdome in New Orleans, Louisiana. The LSU Tigers defeated the Oklahoma Sooners 21-14 to win the National Championship. (Photo by Andy Lyons/Getty Images)

In 125 years of Oklahoma football, and two more than that for Louisiana State University, the two elite football programs have met only two previous times on the gridiron.

That’s a truly remarkable statistic when you stop to think about it, especially considering how many premier postseason bowl games the two schools have participated in over the years.

LSU has made 50 bowl appearances with a 26-23-1 record. This season will be the Tigers’ first in the six years of the College Football Playoff. Like LSU, the Sooners (29-22-1 in bowl games) are making their 51st postseason appearance and fourth in the Playoff era.

Two of those 50 postseason games for both schools were the only two times Oklahoma and LSU have faced each other in football.

The two schools split their previous two meetings, with both games being contested as part of the Sugar Bowl in New Orleans.

The first game between Oklahoma and LSU was played on Jan. 2, 1950, before a Sugar Bowl crowd of 82,000. The 1949 Sooner team was ranked No. 2 in the country and was the first of Bud Wilkinson’s four undefeated teams as the head coach at Oklahoma (1954, ’55 and ’56 were the others). LSU entered the Sugar Bowl game that season as the country’s No. 9 team, according to the Associated Press.

The game was scoreless after one quarter, but the Sooners dominated the rest of the way, winning 35-0. Oklahoma totaled 360 yards of offense, with 286 yards coming on the ground. OU’s Leon Heath was responsible for 170 rushing yards, averaging 11.3 yards per carry. Meanwhile, the Sooner defense held LSU to just 159 yards in the game.

The rematch: second meeting between Oklahoma and LSU

Fifty-four years later, the same two teams would face each other in the same city, New Orleans, but at a different Sugar Bowl venue, the Louisiana Superdome (opened in 1973 at a cost of $134 million). The stakes in this game were much higher than in the first meeting. This was the 2003 BCS National Championship between No. 1 Oklahoma (12-1), featuring the Heisman Trophy winner that season, Sooner quarterback Jason White.

Oklahoma had taken a perfect 12-0 and the country’s No. 1 ranking into the Big 12 championship game the month before, only to be stunned in a 35-7 loss to Kansas State (sound familiar?). Fortunately, OU had built up a strong enough resume throughout the 2003 season to retain the top ranking in the final BCS standings and secure its place in the national championship game.

The Sooners led the nation in scoring that season, exceeding 50 points in seven of 13 games, including a 77-0 blowout over Texas A&M.  LSU was not as potent offensively as the Sooners, but the Tigers were a monster on defense, allowing opponents a measely 11 points a game

What is it they say about offense versus defense? Offense wins games, but defense wins championships. That is an apt description of what happened in the 2003 BCS National Championship. The Sooners’ high-scoring offense managed just 154 total yards and 14 points.

The Sooners narrowed the LSU advantage to 21-14 with a touchdown in the opening seconds of the fourth quarter. Late in the fourth, an Oklahoma drive placed the Sooners on the LSU 12-yard line, but four consecutive pass attempts by OU’s White fell incomplete and LSU took over on downs with under three minutes to go in the game.

At that time, the crowd of 79,342 that was in attendance at the game was reported to be the largest to ever see a sporting event at the Louisiana Superdome.

That brings us to the present and the third meeting all-time between five-time defending Big 12 champion Oklahoma and SEC champion and top-ranked LSU. The two teams will square off on Dec. 28 at Mercedes-Benz Stadium in Atlanta — the same site where LSU won this season’s SEC Championship — in one of two national semifinals.

The winner of that game not only will go up 2-1 in the all-time series but, more importantly, will move on to play for the national championship on Jan. 13 at the now Mercedes-Benz Superdome in New Orleans.